I have a major case of Christmas/writer’s block. I am associating the two with one another because HOW ELSE do you explain my simultaneous inability to a) type a single thought, or b) get my shopping done. It’s maddening – MADDENING I TELL YOU – like I have some sort of brain fog clouding my every move. It’s not that I’m short on thoughts – NO NO NO – in fact at this point I have so many thoughts there is a backlog, a traffic jam, a jumble of ideas all scrambling to get out of my head before I go crazy so I have to apologize for the verbal diarrhea I’m spewing with this post but I just need to get some of the crazy out and clear room for the more functional thoughts that REALLY need to come forward so I can finally embrace the Christmas spirit and GET SOMETHING DONE. Sorry for all the yelling.

On a lighter note, I made rice krispie wreaths yesterday FOR THE WIN.

Nevermind that I caught my kid picking her nose right after she molded a wreath. Dang kids are gross sometimes. After a thorough handwashing I assigned her to berry application instead.

Until then my only holiday baking had been helping my kid with her Shrinkie Dinks, WHICH incidentally are just as rad as I remember them being in 1981.

My daughter loooved them. Pretty sure Santa will bring some in his sack. Er.

On the holiday decor front I hit a stumbling block when I opened our stockings and found this one: 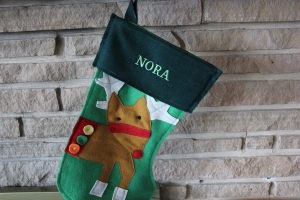 Who the hell is Nora? Last year at this time I was 9 months pregnant with a child I had intended to name Nora. But we changed it at the last minute, in part because I could not – COULD NOT – get past my annoyance that a couple on the show Parenthood had a baby and named it Nora and stole my name. Dumb, I know. I have issues. Anyone know a Nora who needs a stocking?

Speaking of stockings, I find it interesting that I feed, clothe, bathe and care for two children every day of the year, but for some reason when I see their names on stockings hanging over the fireplace it hits me like a ton of bricks that, “Holy crap those are MY kids!” Parenting is so surreal sometimes.

Sheesh I’m feeling better already. What else?! WHAT ELSE can I get out of my system?

Did I mention that my now almost-1-year-old has never – NOT ONCE – slept an entire night? I looked in the mirror this morning after a night that entailed two dead tired sessions of rocking/coaxing/begging her back to sleep and thought, “Who is that tired old hag?” That’s me!

I am a creature who loves to sleep, as per my pre-children love affair with naps. This year of no sleep is taking a mothereffing toll on me. I love my baby more than I ever dreamed I could, but c’mon kid! Give it a rest!

But today I decided I’m tired of being a victim of being tired, so despite my fatigue and sluggishness I just exercised for the first time in eons. WATCH OUT WORLD.

Before we had kids I had brief period of fitness in which I went to the gym every morning before work. When I came home, I was HYPER and PRODUCTIVE and a MANIAC all hopped up on endorphins. My husband referred to it as my version of Roid Rage.

As I am typing this, I am fueled by a case of this Roid Rage which will surely be followed by a painful crash so I better wrap up this wonderful – AWARD-WINNING – post before I hit the wall.

Also I think now I understand why some people say blogging is like therapy. THE END.