Yesterday we went to a birthday party which had a very clear mandate – do not bring a gift, instead bring a paper airplane for a flight party. Love it!

One of my biggest pet peeves is when an invite for a kid’s birthday party is intentionally vague as to whether or not you are supposed to bring a gift. I got one that said, “Gifts not expected.”

Seriously?! What does that really MEAN? Because for an over-analyzer like myself, it could mean any number of things:

Perhaps I am overly sensitive to this because our daycare is Seattle-style crunchy and the parties for my daughter’s school friends are always clearly labeled as no-gift affairs. “No gifts, please.” Straightforward and clear. It leaves no room for doubt.

Part of the reason I get anxious about it is because some parents genuinely don’t want their kids to get a flood of toys, which I can respect. It does seem a little over the top to shower gifts on a 1 or 2 year-old who will play with them for 30 seconds before returning to tupperware and spoons.

But that is not even the primary point I take issue with. If you want your kid to get gifts, that’s cool – just don’t be coy about it, so I am not the only ass who shows up without one. Because that has happened to me more than once.

Of course while I loved the airplane idea, I forgot about it until I was on my way to pick up my kid from school for the party. Realizing we had not yet decorated her plane (made of course, by Mr. Mom), I quickly grabbed some of her stickers and craft scraps to put on it.

Is it just me, or does Tinkerbell look like a stripper? 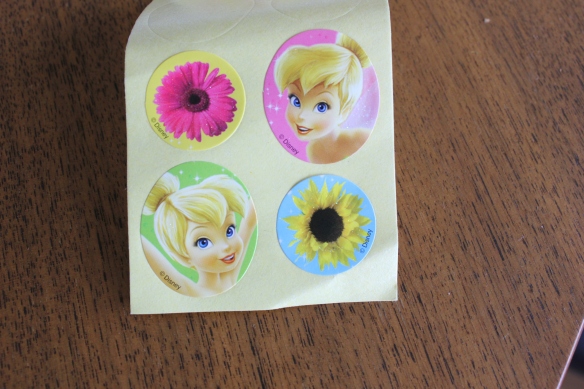 I think it’s the bare shoulders. She should stay away from headshots.

I felt a bit sheepish decorating my kid’s plane – like I was doing her homework for her. I kept it simple so it wouldn’t look like I did it. Because you know, my crafting skillz are otherwise off the hook.

Then I got to the party and discovered all of the dads not only making their kids’ planes, but insisting that they – not their kids – be the ones to fly them in a distance competition. One had even weighted his plane with a rock to make it go further.

Lesson of the day – it’s never too early to start helping your child succeed by cheating.