Lately my daughter loves to make lists. Grocery lists, lists of animals, list of toys – you name it. She’ll list it.

I readily admit that this is a habit she picked up from me. I am an avid list developer. Right now in my sight there are four, no five, different lists that I have created. Mostly to-do lists. But when one gets too long, I’ll start another and try to keep it more focused.

You may be thinking, “Hey Amy, I bet if you spent time completing some of those to-do’s instead of just making more lists, you might actually get something done.”

Good point. Let me write it down on my List of Ways to Be More Productive. Thanks.

Sometimes my daughter likes to write the lists herself (we tell her how to spell the words), and other times she prefers that we do the writing while she dictates. And believe me, she can be a dictator.

Written by Daddy, dictated by daughter

In the past couple weeks, we’ve noticed signs that she is starting to read words here and there – including on my lists. Now, I don’t want to overstate anything, BUT I’M PRETTY SURE THIS MEANS SHE IS A GENIUS.

I also can’t help but wonder if all this list-making isn’t partly responsible. I mean, how many times can the girl make a list of princess fairies, or things to buy at Target, before she is capable of passing the GED?

You see what I’m doing here? It’s called spin. I am making you believe that my unproductive and ineffective habit is teaching my child to read. Next thing you know you’ll be paying me to make lists with your kid too.

Of course the only downfall of a child who can read, is that she can read. By that I mean, you can’t go writing lists of swear words anymore or Lil Miss Spelling Bee will find it and start calling you a c*cks*cking motherf#cker.

Amy, do you really make lists of curse words? Maybe you should see a therapist about this.

I may also have to start thinking twice before using the oldest parenting trick in the book. When my husband and I want to say something to one another incognito, we spell it out.

But for the most part I am excited for my child to learn to read and write. She can start to help me make grocery lists, packing lists for vacation, lists of lists I still need to create. The list of possibilities is endless.

And if the below example is any indication, this girl will invent new categories of lists that I haven’t even thought of yet. This is a list of household dangers written by the little list maker herself. 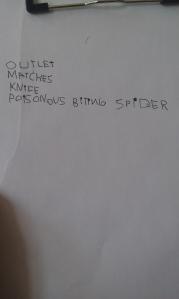 Mama is so proud. Also a little creeped out about the biting spiders.