Today is Day 6, or maybe 7, of dense all-day fog here in Seattle. Every once in a while it breaks around 4:00 and you get a smidge of daylight before the darkness returns, but otherwise it’s just a constant haze. This was today, all day. 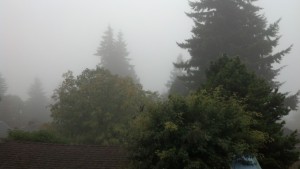 Ok I’ll stop. You get the point.

Initially I was enjoying the fog – it’s kind of dreamy and nice, and lends itself to cozy pj’s, hot coffee, Netflix and naps. You would think it would also lend itself to blogging, but apparently not so much.

However unfortunately now I think the fog is taking a toll on my mental state, clouding my ability to think or be productive. Kind of like how Halle Berry takes on the characteristics of a storm in X-Men, but way less useful or impressive. Note to self: pitch Marvel Comics on a new X-Men character named Fog, who uses her superpower to stare out the window while eating pita chips.

Even writing this stupid post about fog is proving difficult. I mean c’mon, Amy – it’s fog! Few things are more riveting. This post should write itself.

Even MORE unfortunately, the fog reminds me of scenes from Twilight, so I have spent an unhealthy amount of time thinking about vampires over the past week. That’s probably not something I should admit publicly. But seriously – did you see that movie? It was filmed in this region, so it’s only natural to assume those fangy bastards are running rampant right now, using the fog as a protective shield while they feast on the neighbor’s dogs and have sexy time with sullen teenage girls. I’m just waiting to see Edward Cullen scale a tree in my backyard with a dead squirrel hanging out of his mouth.

FURTHERMORE unfortunately, I fear the fog is exacerbating my hermit-like qualities. What is the point of leaving the house if you can’t see anything? And what is another word for hermit-like? Hermitish? Can you say, ‘She had a hermitish demeanor’?

Answer: YES, apparently you can, and more importantly please note the 5th definition of the word “Hermit” is “a spiced molasses cookie often containing raisins or nuts.” So I could be a hermit who loves to eat hermits. Best discovery of my day. I win. Victory for Fog (the superhero).

Like I said, this fog is not bringing out the best in me. I’m really hoping it clears before the weekend.

9 thoughts on “Blame it on the fog”