1. I like my husband again. This is not to say I did not like him before, but in hindsight I think it’s safe to say our relationship was reeeeally strained for a while. I realize now that I was a huge ball of stress trying to juggle work, home, motherhood, pregnancy, a remodel…and he was often my punching bag.

Not to mention now that I’m not racing either out the door in the morning, or to do work every night after putting the kids to bed, there are more pockets of time – albeit short ones – when he and I can catch up and connect. As long as there is not something on TV that I want to watch. Holy conflict of interest.

2. Less road rage. This one just dawned on me the other day as I was driving my daughter to school, weaving in and around endless construction detours. We were having fun naming the various bulldozers and dump trucks, playing “I Spy a Pothole,” observing the progress being made as they repair the neighborhood street… when I realized that Old Me would have had a MOTHER-EFFING HEART ATTACK if I was trying to maneuver these delays on my way to daycare and then work.

Yet here I was – staring so long at a construction worker as he jackhammered that I missed the light! Silly me. Now I would have to wait another 3 minutes until it turned again. Guess I will just keep on watching him jackhammer with those tanned muscular arms…glistening sweaty brow…aaaand, a pony tail. Moving on.

3. More daddy/daughter time. I knew I would spend more time with my kids by staying home, but it didn’t occur to me that my husband would too – at least with our oldest daughter. But now that he no longer has to deal with making dinner as soon he gets home, he can just jump right into playtime with her. Which she LOVES.

This has actually been one of my favorite developments. My daughter has always been a bit of a mommy’s girl. To the point that my husband felt a bit isolated at times – because she would literally push him away or only want me. But now she anxiously awaits his return from work, welcomes him with huge hugs, and likes it when he puts her to bed. Everybody wins.

4. I’m a better friend. You know those people who always remember your birthday, who bring you dinner when you’re sick, who check in when they haven’t heard from you in a while? I am not one of those people. I don’t even remember my own anniversary, let alone other people’s milestones. And Old Me felt so overwhelmed by the demands of work and family that I put almost zero energy into friendships.

But since I’ve been home I’ve reconnected with old friends, had lunch with former coworkers – hell, I not only made a meatloaf for friends who were moving, but yesterday I brought a homemade apple crisp to a friend who hosted a playdate. Who am I?!? It’s been fun and fulfilling to have a bit more friendship in my life outside the context of work.

5. Better return on our restaurant investments. It was a no brainer that we would eat at home more often, but having limited disposable income has made us much choosier about where and when we eat out.

This one really registered yesterday when my daughter was sorting her toys and she had a pile she called, “My McDonald’s toys.” We hit the drive-thru one too many times last fall. At one point I think 50-70% of our meals were at restaurants or take-out.

But now, if I’m going to spend money eating out, I’ll be damned if I’m going to spend it on fast food crap. Or even on a meal that is just ok. It feels like such a waste to squander those precious dollars on food that is not substantially better than what I can make at home. Last weekend when debating where to *splurge* on a restaurant lunch, I made sure we went to the best damn gyro shop in town. And it was so worth it. 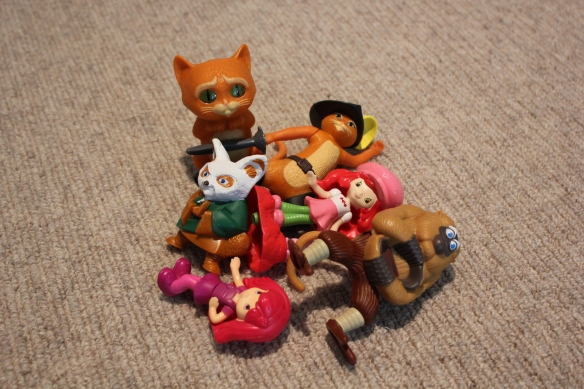 The remains of one too many Fat & Happy Meals. And a very creepy kitty.

I realize these are not benefits I could only reap by staying home vs. working. Staying home has simply allowed me to pause for a minute and focus on a few other things that matter to me. If/when I return to work, hopefully I won’t lose sight of them again.

6. The Olympics! I admit I was excited when I realized the Olympics would be on this summer while I’m home. Now I can waste time watching the sports they only broadcast during the day like archery (sure to be riddled with Hunger Games references), fencing and horse wrestling. Can’t wait.